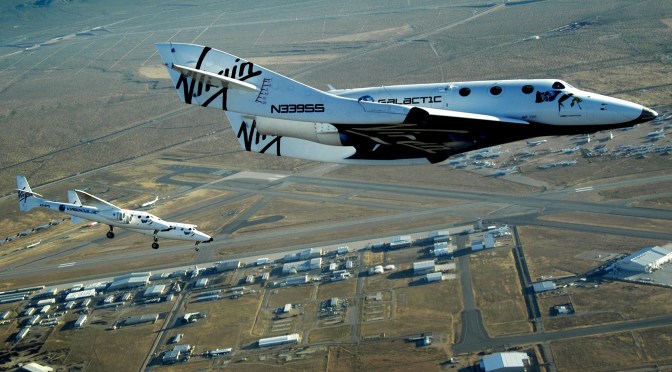 SpaceShipTwo, a rocket plane that was meant to carry well-heeled tourists on short if expensive rides to space, crashed in the Mojave Desert on Friday during a test flight, killing one of the two pilots.

The pilots, who have not yet been identified, were flying the plane for Virgin Galactic, the space tourism company created by the entrepreneur Richard Branson, and Scaled Composites, the company that designed and built the plane.

One pilot was able to parachute from the plane and was taken to a hospital with “moderate to major injuries,” said Ray Pruitt, the public information officer for the Kern County sheriff’s office in California.

The test was the first time SpaceShipTwo had flown using a new, plastic-based rocket fuel.

It was the second major accident in a week for the commercial space industry, which has been widely promoted in recent years as an alternative to costly government programs. On Tuesday, an unmanned rocket launched by Orbital Sciences Corporation of Dulles, Va., which was carrying cargo to the International Space Station, exploded 15 seconds after launching.