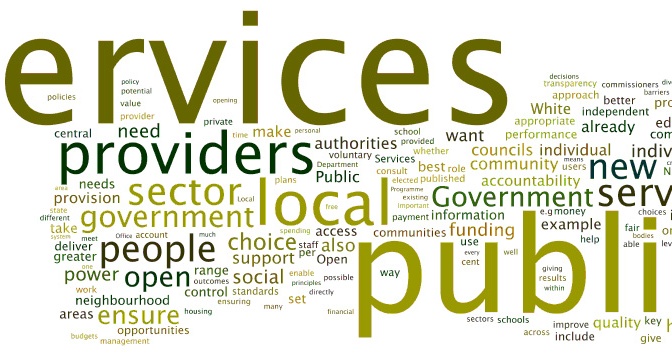 The realities of further fiscal consolidation present us with an opportunity to fundamentally re-shape public service provision.

In the words of Beth Simone Noveck, former aide to Barack Obama: “What business do you know, what other sector of the economy, and especially one as big as the public sector, that doesn’t seek to reinvent its business model on a regular basis?”

With that in mind, it is noteworthy that the recent report by Simon Stevens, “NHS Five Year Forward View“, which identified an NHS funding gap of £30bn, received plaudits despite its chilling message for politicians.

The consensus is that it was well-received largely due to the candour of its content. It also highlighted the inadequacies of some solutions for public service reform mooted during party conference season.

We’re only half way there in tackling the deficit. We need to identify a further £77bn in savings to get the UK’s public finances in order – equivalent to £1200 per person in the UK.

And since the austerity measures revealed in the 2010 Comprehensive Spending Review, in terms of cuts many of the easy wins have long since evaporated. This means that unless departments work more closely together they will struggle to achieve the further reductions expected of them.

But the realities of further fiscal consolidation also present us with an opportunity to fundamentally re-shape public service provision to place it on a more sustainable footing.

A new CBI report, “Our future public services: a challenge for us all” sets out a number of practical steps the next government can take to ensure public services simultaneously meet the needs of the 21st Century while maintaining high standards.

Firstly, public services require wholesale re-shaping to better meet public needs. Being able to access a greater number of services online will benefit huge numbers of people, while saving time and money. Our new report recommends that by 2020 e-prescriptions and online GP consultations should be available, as well as school profiles by area, including ranking, transport links and application tracking.