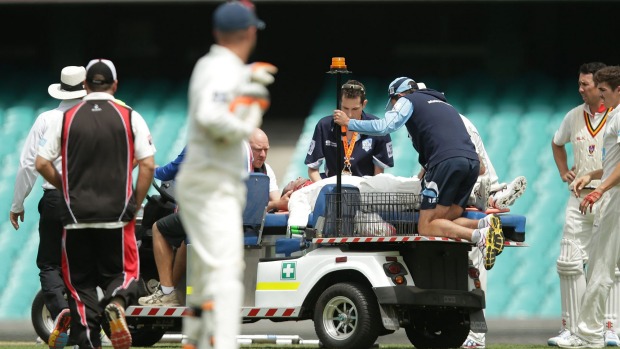 Cricketer Phillip Hughes spent a second night in an induced coma while his family, doctors and Australia watch and wait as he battles for his life.

His father, mother and sister are at his bedside in St Vincent’s Hospital.

Hughes, who is due to celebrate his 26th birthday on Sunday, remained in a critical condition in the hospital’s intensive care unit on Thursday morning.

The South Australia-NSW Sheffield Shield match was abandoned on Tuesday following the accident, and Cricket Australia called off the other two shield games in Brisbane and Melbourne on Wednesday after consulting players and the Australian Cricketers’ Association.

“Given how players across the country are feeling right now, it’s just not the day to be playing cricket and we understand that,” Cricket Australia general manager of team performance Pat Howard said.

Hughes suffered a catastrophic bleed in his brain in the freak cricket accident, in which his skull was fractured after he was struck by a ball in a vulnerable part of his head not protected by his helmet.

The fracture occurred near the large vessels that transport blood to the brain, damaging one, which quickly caused heavy bleeding.

Such subdural haematomas are dangerous not only because the pressure caused by the blood pooling in one place can crush the brain, but also because it blocks blood from entering to provide the brain with the oxygen it needs to survive.

Questions remain about why it took more than an hour from when Hughes was struck by the ball at 2:23pm until he arrived at St Vincent’s Hospital for emergency surgery.

A leading Sydney emergency doctor, who declined to be named, said it appeared a substantial amount of time was spent stabilising Hughes at the site of the accident, rather than getting him to hospital where he could be treated.

“It is not isolated to this case. It’s surprising how long transport time can be,” he said. “Stabilisation doesn’t mean [they are] attempting a cure”.

Large hospitals were used to treating bleeds on the brain, he said.

“[In regional hospitals] we don’t really see major trauma like that, but at a city hospital like St Vincent’s it is not uncommon.”

Fairfax Media understands Hughes’ neurosurgeon was Malcolm Pell, who performed life-saving surgery on Parramatta Eels star forward Adam Ritson, whose life-threatening brain cyst was discovered in a CAT scan after he was concussed by a high tackle in 1996.

Hughes was struck on the head by a bouncer bowled by NSW paceman Sean Abbott during the afternoon session of the shield match at the SCG.

NSW team doctor John Orchard worked on Hughes while he was still on the ground.

Hughes was taken off the field and received CPR and mouth-to-mouth, before being taken to St Vincent’s in a critical condition.

He remains in an induced coma in intensive care, after emergency surgery to relieve the pressure on his brain.

The entire NSW squad convened at the SCG and were addressed by coach Trevor Bayliss, a psychologist, and Cricket NSW chief Andrew Jones. They were told to handle the situation in whatever manner they felt appropriate.

“Obviously it’s difficult for them,” he said on Wednesday.

Hughes was a popular player, not just in Australia but around the world and everyone was feeling for Hughes and Abbott, Mr Sutherland said.

To help deal with the overwhelming level of interest, Cricket Australia has set up a page on its website for people to leave messages for Hughes and Abbott.

Meanwhile the president of the Northern District Junior Cricket Association Philip Azize called for the introduction of a compulsory time out rule after any hit to the head.

“I’ve already fired off an email to all clubs, managers, delegates and parents saying helmets are compulsory,” Mr Azize said.

Hughes’ plight resonated around the globe, with messages of support flooding social media.

He held the top position in social media in Australia, the United Kingdom, India and South Africa.

He was the second-most talked about topic on Twitter globally for more than an hour on Tuesday evening.